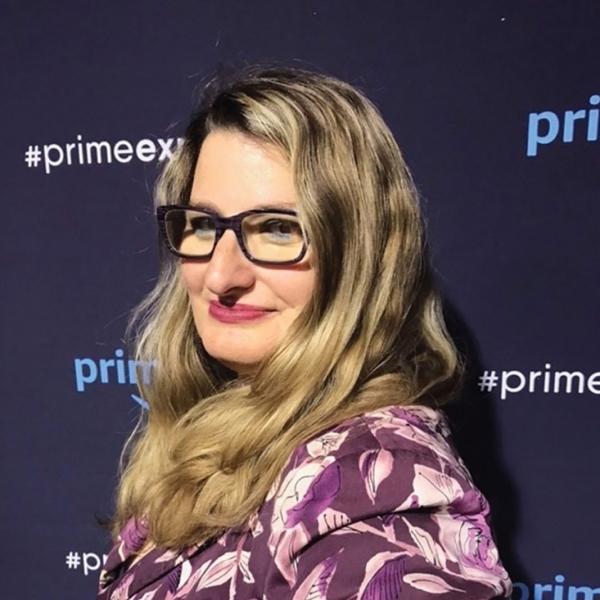 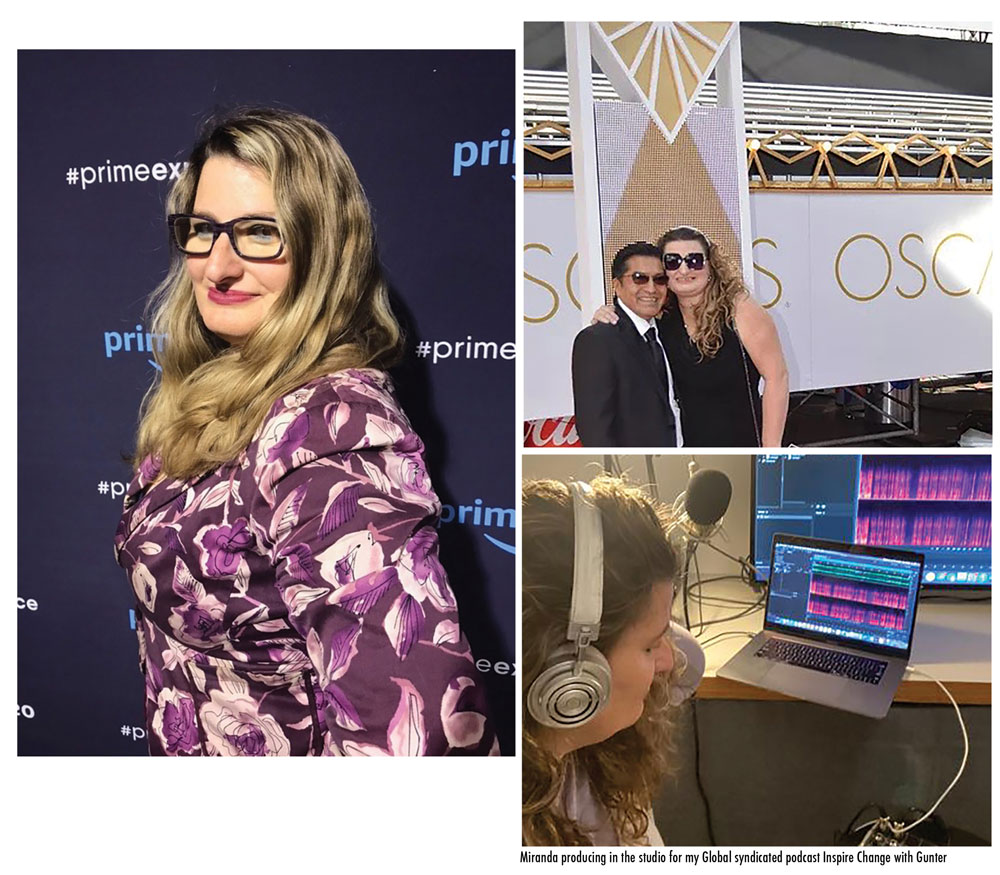 Miranda is a multiple-award winning writer/director. A graduate of UT/Austin with a BFA in Film/Television, Miranda’s student short True was purchased and screened by L’Entrepôt Cinema in Paris, France (1997). She later directed an art magazine episode for the show Eat Art on PBS that aired in 5 US markets (Houston, Austin, Dallas, Phoenix, Los Angeles). In 2001, she Executive Produced/Wrote/Directed Marisa Romanov, a short that debuted that year at the International Venice Film Festival Official Shorts Selection and received Audience Choice. The short also screened that year at Berlin Film Festival in the Alternate Selection. Spigener-Sapon’s play The Flame, in which she directed in 1997, received praised by The Village Voice during its' Off-Broadway run at the former Bleecker Street Theatre in NYC and also by The Houston Press at the NY Deli Theatre in Houston, Texas. Later, in 2017, Miranda directed the 20th anniversary short-run of The Flame in Los Angeles, gaining praise from The Los Angeles Times and several blogger influencers. Miranda has produced and directed a number of local, regional and national commercial spots for television as well as documentary projects as a producer at Discovery Networks that included Walk On,, about equine/hippotherapy for the disabled. In 2018, Miranda directed the stage adaptation of her WCOP award-winning, time-travel/sci-fi/romance short story, Coffee with John, which received a glowing mention in The Los Angeles Times and Broadway World.

Miranda produced/directed the documentary feature, Masculinity That Inspires Change and directed the short film The Power of Forgiveness, both acquired by Amazon. In Addition to her work in TV/film/theatre, Miranda was signed by Winterwolf Press to write a 4-book prequel series to her Marisa Romanov TV series project that is development. The first novel, Charles: A Marisa Romanov Story, to debut later in 2021. She also produces a nationally syndicated podcast on iHeartRadio, Audible, Spotify and Apple that is in its third season: Inspire Change with Gunter. Most recently, Miranda made her narrative feature film debut as a director in the feature film “Lifelines”, a noir psycho-drama starring Lew Temple, Ross Gosla, Fern Lim and Jeremy Denzlinger that takes the audience through the depths of mental illness and depression. It is set to debut in limited theatrical release plus streaming in 2021. Additionally, she is the Showrunner/Creator and Director of a sci-fi/animated/mixed-media series “Haisley” that is currently in production and will debut later from a major streaming network to be announced soon. 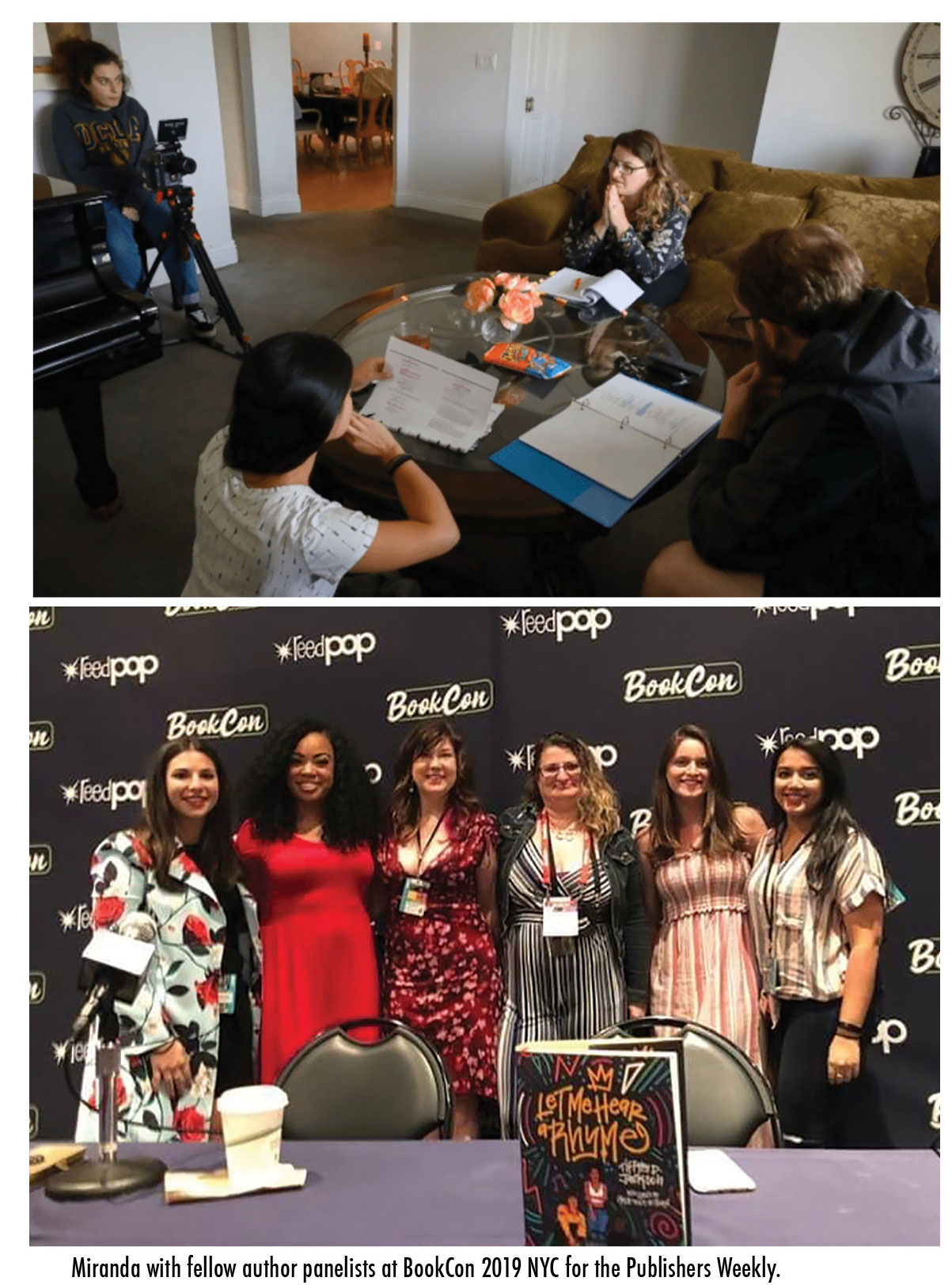 How did you know that you wanted to make movies?
Oh man, I think I got bit by the bug very early on. I have childhood friends that remind me how I used to “direct” little mini-plays with my friends. I’d do everything from writing up a little script or just telling them the script and then we’d go through our clothes as wardrobe, pull things out of the house to use as props and “set design” and all my friends were cast in specific parts and we just perform them around the neighborhood. Sometimes we had an audience of passerbys sometimes not, but it was fun. I was probably about 5 or 6 when I started doing this. As I got a little older like around 8 or 9, I’d grab a hold of any camera I could find and shoot photo collages or sometimes play around with an old 8mm film camera for little movies.

How and when did you create Noirtainment?
Noirtainment started conceptualizing around 2017 as I wanted to create projects that had a “noir” aesthetic and feel. In 2019, I actually started registering, branding and building my core team.

What is Noirtainment?
Noirtainment Productions www.Noirtainment.com is an independent production studio that produces quality film, television and stage projects that are noir in aesthetic whether it's scripted or unscripted. The name is a play on Noir Entertainment and merging to form Noirtainment – an independent studio that creates content that enlightens, empowers, inspires, entertains and finds the light in the darkness.

What do you enjoy the most of your job?
I think I just love writing and creating projects that not just entertain, but inspire change, hope and a deep human connection even in troubled times when there feels there is no light at the end of the tunnel. There is always light in the dark and if we can all just spend a smidge of our time to create something beautiful that gives hope to all even in the darkest times.

What are some challenges that you face in this profession?
There is a lot of elite-ism in this industry. It's tough, but you have to make your mark. If you have a dream or a goal, stick with it and persistence is key. As women, we ARE all minorities…no matter what the color of our skin or background or social status is…we have an uphill battle to be heard and to tell our stories, but the glass ceilings are being shattered and we must keep up and continue to the finish line!

What makes a script a movie? What do you look for?
Great question and I may have to answer in parts. First, a script is the paper once you’ve gotten it out of you and then you go through a few revisions to get it where it needs to be to start pitching or developing it for the screen. Second, film (and television) is a very collaborative medium with many moving parts and people to get it to the point that you end up seeing on the screen. Finally, whereas your choice to go a traditional route by having the script shopped around by your agent/manager or you decide to go the independent route…there will be a long journey of more changes, casting, producers, etc, that will come on board with you to shape into what will be a movie. If you ever read a script of release film or show episode sometimes you remember everything you read actually on the screen, but then other times or sometimes there is rewording or scenes cut or scenes flipped around. This happens because once its in development and headed towards production, the script takes an organic form. It is no longer just words on paper, but it's brought to life by the actors who invest their skill in the characters, the scenes and settings/locations are now a true visual you can watch (or in a way visit with your imagination), the music score makes you feel a level of emotion, etc. I can go on, but this is a glance into the ingredients of the soup — from concept idea to script to development/production/post and eventually to the viewer in distribution.

Tell us about your last project Haisley?
Haisley started out as a project that my manager brought to me through the production arm of his management company in the middle of the lockdown in April. All production had shutdown and everyone as you know was concerned about working and paying bills. The idea was to launch an animation division of Noirtainment. I was a little leery about taking on another project, and animation is new to me, but my team at Noirtainment includes DeVonna Prinzi, she is our Director of Creative Affairs and an Executive Producer on the project. She was key in the hiring of our animators, VFX artists, editors, etc to get this project off the ground. Haisley is a 100% virtual production from the writers room to each department of production. It is a mixed-media meaning we have animated characters that inhabit and navigate through a real world environment and locations. The story is a noir/sci-fi series that follows a strong young female, a precocious 7 year old named Haisley when she awakes in a strange alternate universe and encounters individuals, creatures and beings that she has to learn to trust in order to find her way back home and with her father. These beings include a Raven and a talking Saxophone. This project is part of a larger project that I can’t discuss publicly yet, but it takes you on a journey that will make you think about how you view life, those around you and the importance of the human connection. You can follow the series here at HaisleySeries.com.

What advice do you give to someone who is pursuing your career?
Just be strong, stick with it and don’t give up. This business is tough and can even be mean at times, but you don’t have to feel like anything is out of reach. With a good attitude and if you are nice to everyone (the best you can) even when it is challenging and people aren’t so nice to you…you never know what lies in the road ahead. Stay grounded, but keep your dream in clear view and you will get there. Also appreciate the little things, those little accomplishments that might not seem like much, but actually can be huge and a blessing in disguise in the big picture of your career as you keep moving forward!

More in this category: « Lisa Rinna

Make sure you enter all the required information, indicated by an asterisk (*). HTML code is not allowed.