A Fancy Fork in the Road 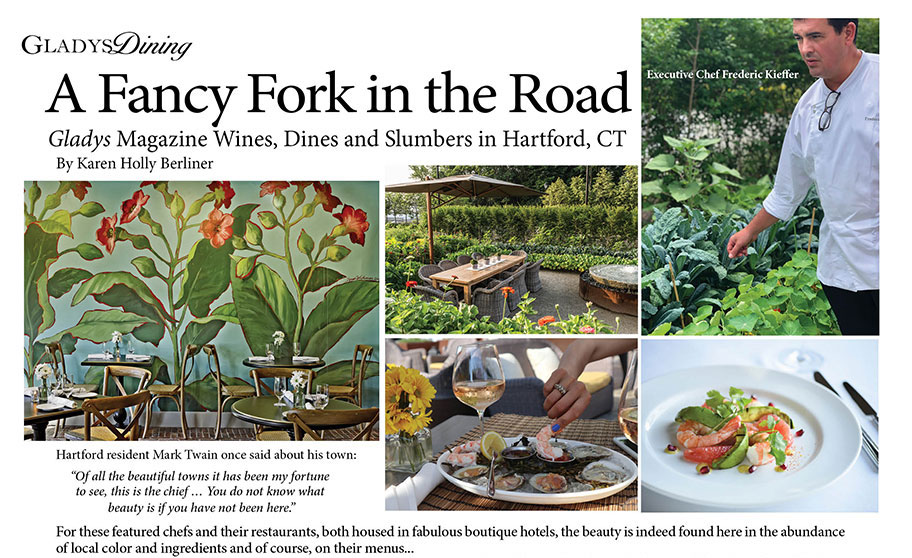 This sublime dining spot located in the Delamar West Hartford hotel captures you visually, even before you have a bite to eat from its menu, with its distinctly rich atmosphere---- both easy on the eyes and over the top loaded with history. ARTISAN West Hartford pays tribute to Hartford, expressed through thought­fully curated decor such as the hallway leading to its dining space, lined with authentic red planks reminiscent of the region's tobacco farms of yesterday. Add to this a larger than life mural of flowering tobacco fields with not a detail missed, along with a charming country-chic vibe featuring a colorful and fragrant garden/outdoor dining space. Enter the garden and take in the whimsical decor such as Mason jar pendant lights and natural wil­low branch hanging lanterns strung from the trees, making for a truly enchanting feel of a secluded sanctuary. Breathe in the fresh scent of the restaurant's herb garden as it mingles with the aroma of tasty dishes served; take in the sound of relaxed conversation, along with strains of soft music playing. Enter the main dining room and view the striking hand painted fig mural along the back wall, along with a dark wooden bookcase holding a collection of eighteenth-century Swedish books, brass and glassware. Notice the two-story ceilings, light wide-plank pine flooring and Gustavi­an furniture, all lending an inviting feel. The pewter Parisian bar top surrounded by 9,000 hand-laid bricks in a herringbone design tie everything together with finesse. Sofas and chairs grouped for casual conversation around the handcrafted traditional Swedish farmhouse tile fireplace create great appeal.

The New England-inspired menu is continuously changing and influenced by the four seasons in capturing New England together with the French heritage of its own Chef Kieffer. For example, the signture Artisan Seafood Chowder is loaded with tasty oysters, clams and shrimp served with freshly baked fennel crackers as op­posed to the typical clams and potatoes standard versions.Those little touches here and there give beloved traditional dishes a nip and tuck via unique interpretation, maintaining that which we as diners have come to expect, but taking it notches above the ordinary. Another popular choice on the menu is their signature prime han­gar steak served with watercress, shallot sauce and a generous pile of crispy pommes frites in classic bistro mode, but again with a signature twist. Desserts such as their lemon olive oil cake with Maine blue­berry compote or perhaps a collection of local artisanal cheese with a perfectly paired glass of wine conclude the meal beautifully.

For those looking for a more intimate space, the Private Dining Room at Artisan (often referred to as the "Copper Room" ), features custom copper string chandeliers suspended from a gold-leaf patina barreled ceiling. Keeping with the 18th century theme throughout Artisan, a Gustavian dining table, grand armoire and roomy chairs with farm­house upholstery enhance the vibe. An intricate plastering technique that dates back to Roman times adorns the walls. What a memorable dinner party could be had here.

When you chat with Chef Frederic, you get an immediate sense of his passion and drive, that drives him way beyond his love for food, farming, creating and cooking. Kieffer shares his life history with me, meaningful and impressive from a very young age to the present; and we linger deliberately when we touch upon something of significance and passion. Kieffer grew up in France and attended culinary school there in the late 1980s; first visiting America when he participated in a culinary exchange program with Johnson & Wales University in Providence, Rhode Island. Following this, Kieffer began working in Greenwich, ultimately spending over a decade in restaurants both there and in New York City. He humbly mentions that he was one of three chefs involved in the 1996 reopening of Windows on the World after the first bombing of the World Trade Center. (The restau­rant would ultimately be taken down during the terrorist attacks of September 11, 2001). Chef describes getting" there" Windows of the World) each morning, looking out of those famous windows and spend­ing his mornings "peeking out above the clouds". This is who he is in es­sence-the passion and the great losses that followed.

As a distinguished chef, he gets to express this through cooking, dining and teaching his staff. "Passion is expressed through making things your own" he explains. He offers the example of his Yankee Pot Roast, steeped in New England tradition as well it should be but instead of using typi­cal cuts of beef, he uses tender beef cheeks. "I remain true to the idea of the classics but with my own approach. As a chef, your dishes need to have a story behind them or they're just standard versions of the same thing:' Kieffer sources fresh, sustainably grown local ingredients, and is dedicated to highlighting Connecticut-grown produce in his menu. For him Farm-to-Fork isn't a trend or a business model; it's a lifestyle for him and his family.

About The DELAMAR West Hartford:

Situated in the heart of the Blue Back Square neighborhood, DELAMAR West Hartford is the area's newest boutique luxury hotel. Styled with a contemporary take on traditional elegance, this six-floor mid-rise with 114 rooms and suites, features an open plan lobby resplendent with mar­ble, big windows overlooking the lawn, professional displayed artwork, a beautiful piano in the lobby accompanied by a spiraling seat made with 2,500 quarter coins which lends great character. All guests visiting here toast with a complimentary welcome glass of champagne at check in enjoy a lovely breakfast buffet spread; can take advantage of a courtesy vehicle within a 5-mile radius as well as valet parking. With high-speed internet access, access to their fitness center with Peloton bikes, a class at The Yoga Shop and complimentary admission to the New Britain Mu­seum of American Art.

The spa invites all to relax and rejuvenate.
Not a trick missed. 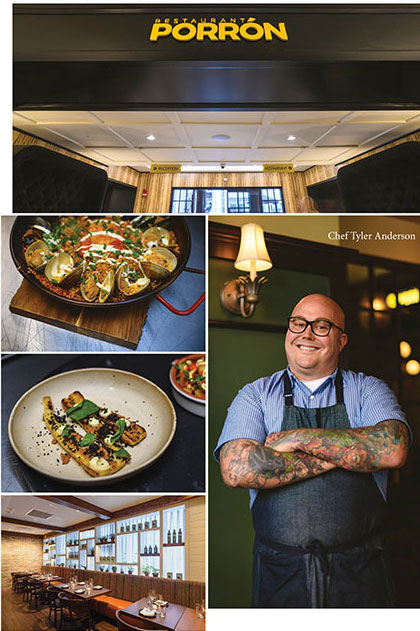 Opened in the spring of 2018, this signature Spanish style dining spot is located in the Goodwin Hotel. Helmed by celebrity Chef Tyler Anderson and his loyal professional team, Restaurant Porron brings local fare to a globally-inspired menu which features a Ham Bar and a Wine Tasting Room making for an authentic Spanish dining experience, while main­taining the traditions of New England. The Ham Bar features an assort­ment of ham with such tasty choices as Iberico de Bellota (Spain), Ben­ton's Smoked Ham (Kentucky) and Coppa (Italy) among others. Skewer of octopus, pickled peppers and onion, smoked duck legs with a sherry glaze and spiced yogurt introduces exotic flavors and for a heartier appe­tite, a full sized course such as the delicious grilled quail with chimichurri hits the spot.

The Wine Tasting Room boasts an Iberian-style tiled floor with ceiling­high shelving wines from around the world. Together, the Ham Bar, the Wine Room and extensive and creative Tapas-style menu all lend to shar­ing, tasting and relaxing making for not just a delicious meal but a dining destination experience. The professional servers and their team enhance your dining pleasure with great suggestions offered, never insisted.

This craft cocktail bar pays homage to the iconic history of the Goodwin building starting with the library, which gives a deliberate nod to the pub­lishing hub that the city of Hartford once was to the craft-cocktail menu with its classic twist, at the same time updated by the fun gin-and-tonic selection and other classics, many of the ingredients from local purveyors. Pina which is Spanish for pineapple was a symbol of hospitality in colonial America. Visitors are able to meander from the bar to the dining room, and back again should they desire, enjoying the Spanish-style tapas from Res­taurant Porron just down the hall. Bar Director Tim Cabral has developed an extensive list of classic, modern and Spanish-inspired drinks.

For the quelling of your daytime sweet tooth, Pastry Chef Kristin Eddy has designed an artisan donut menu. Hotel guests and passers-by can stop in for some coffee and a sweet treat as they relax in the circular "library" nook of the restaurant.

Nationally renowned Chef Tyler Anderson has been nominated for The Best Chef Northeast award from The James Beard Foundation for the past five years. A former TOP CHEF
contestant from Season 15 of Bravo's hit show; he has also appeared on several Food Network shows. Chef was just 16 years old when he dis­covered his affinity with food preparation in restaurant kitchens. Each experience helped him develop his culinary skills, his palate and his sea­soned signature style. Anderson is embracing what many poo pooed - appreciating the magic in maintaining Hartford's character in the name of revitalization. His concepts and menus are fresh and unique while he manages to maintain tradition. When asked what his favorite spice is, he responds "fennel pollen".
I believe that this says it all!

The Goodwin was originally developed in 1881, as an upscale apartment building and later converted to a hotel hosting prestigious guests such as J.P. Morgan, who resided at the hotel during visits to his hometown. To­day it is touted as an iconic Hartford landmark, with a vibrant urban feel while staying true to elements of its heritage and tradition. The Goodwin is a one-of-a-kind boutique hotel in Hartford, known for its impeccable attention to detail. Its downtown location puts visitors in the heart of Hartford's very best in shopping, dining, art and culture.

More in this category: Gladys Magazine Enjoys a Foodie Weekend in the Hamptons­-­Bridgehampton & Water Mill 2019 »
back to top